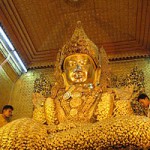 The Mahamuni Buddha Temple also called the Mahamuni Pagoda) is a Buddhist temple and major pilgrimage site, located southwest of Mandalay, Burma (Myanmar). The Mahamuni Buddha image (literal meaning: The Great Sage) is deified in this temple, and originally came from Arakan. It is highly venerated in Burma and central to many people’s lives, as it is seen as an expression of representing the Buddha’s life. 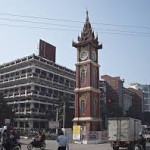 Mandalay Zaycho  Market (also spelled Zay Cho, Zeigyo, Zaygyo, Zegyo Market) is the largest and the most important market in Mandalay as well as in upper Burma. Built since the time of King Mindon, Zaycho market is one of the oldest markets in Myanmar. Zaycho in Burmese means “cheap price”. Whether the prices are really cheap or not is difficult to answer. However, this is the market that goods and products from all over Myanmar as well as goods from India, China and Thailand are sold in lots. Zaycho market is the whole sale market as well as the retail market. You can find anything from Thai silk, Chinese (actually Burmese in origin) jade, Indian spice to Burmese handicraft, arts and jewellery. 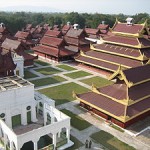 The Mandalay Palace, located in Mandalay, Myanmar, is the last royal palace of the last Burmese monarchy. The palace was constructed, between 1857 and 1859 as part of King Mindon‘s founding of the new royal capital city of Mandalay. The plan of Mandalay Palace largely follows the traditional Burmese palace design, inside a walled fort surrounded by a moat. The palace itself is at the centre of the citadel and faces east. All buildings of the palace are of one storey in height.